By Amanda HaasJanuary 19, 2022No Comments 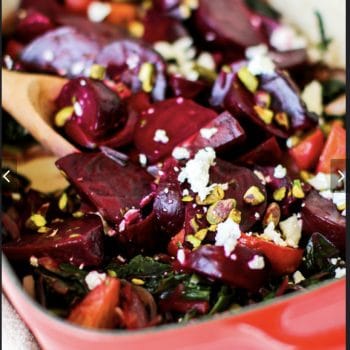 The beauty of roasting food is that it enhances the flavor of most ingredients.  And because it is a dry heat, it’s easy to obtain crispy skin on a chicken or perfect caramelization on your vegetables.  This practical roasting pan moves from oven to cooktop, allowing you to use only one cooking vessel for the entire recipe.I love the addition of chard with the beet greens to create a room temperature “salad” that can accompany other dishes, but the beets are absolutely delicious on their own with the vinaigrette as well.
Print Recipe Pin Recipe Add to Collection Go to Collections
Prep Time 30 mins
Cook Time 1 hr
Total Time 1 hr 30 mins
Servings 6

Tried this recipe?Let us know how it was!